Many of you will agree that the past two years are ones we would like to put behind us. However, as investors, we may want to rethink that attitude. After delivering an 18.4% return in 2020, the S&P 500 Index followed with a 28.7% return for 2021.

The stock market had quite the year. In addition to the return mentioned above, the S&P 500 recorded 70 closing highs in 2021, according to S&P Global. The most for a single year since 1995 (77). Approximately 1 out of every 4 trading days was a new record close. The index also delivered a positive return for the seventh straight quarter—the longest streak since 4Q17. The benchmark index has finished higher in 12 of the last 13 years and had its strongest December since 2010.

Participation was broad-based as companies of all sizes generally enjoyed market gains. When viewed from a style perspective, the narrative begins to differ. Growth outperformed value in the large-capitalization space—albeit by a small margin. The Russell 1000 Growth Index returned 27.6%, slightly better than the 25.2% return for the Russell 1000 Value Index. The divergence is more significant in small companies—and value turned the tables on growth. The Russell 2000 Value Index returned 28.3%, handily beating the 2.8% return of the Russell 2000 Growth Index. 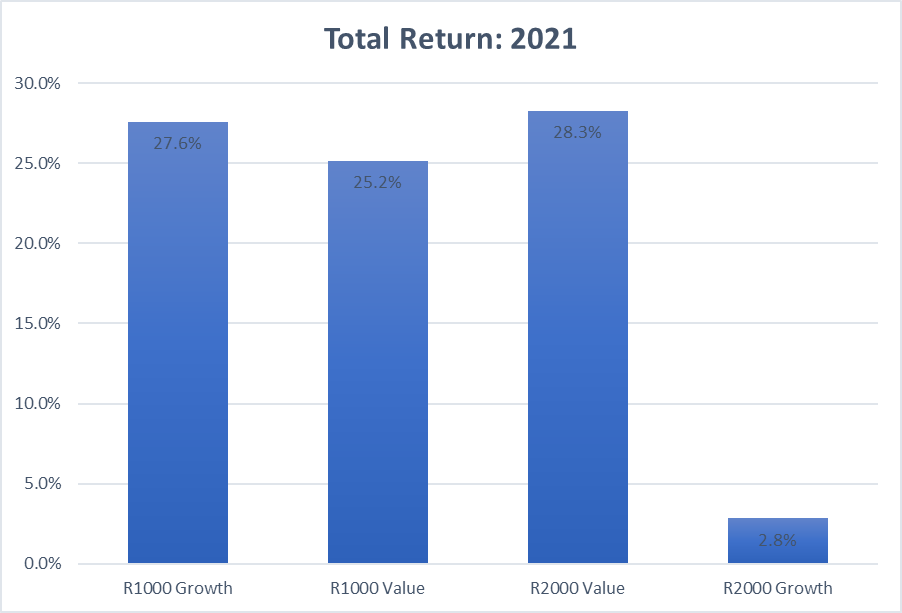 In my observation, two criteria contributed to this divergence. First, the Russell 2000 Growth Index is laden with fast-growing, low-profitability companies. Those companies were not favored by investors this year. The second is the phenomena of GameStop and AMC Entertainment. As a novice remark, the Russell 2000 Value Index comprises small companies that are viewed as bargains relative to the rest of the market.

From a global perspective, the U.S. was once again the place to be. The MSCI EAFE Index delivered a return of 11.3%--respectable; however, nowhere near the S&P 500. The last time international markets outperformed was in 2017.

Why invest outside the United States? Great companies exist outside of our borders—and not all the best-performing stocks are in the U.S. This chart from Capital Group details that. The fact is that stock selection matters in international investing. 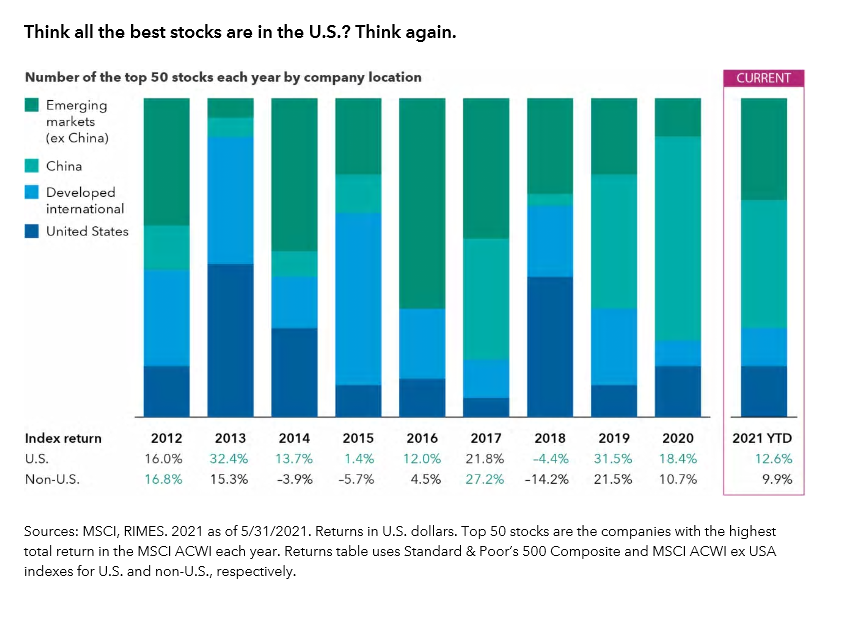 Fixed income followed through on delivering a negative total return. A paltry 0.01% return during the fourth quarter did not help. The Bloomberg Barclays Aggregate Bond Index returned -1.54% for the calendar year—marking the first negative calendar return since 2013 and only the fourth negative year since the index inception in 1977.

For those loathing the negative values on their statement, I will remind you to think longer-term. The Agg's three- and five-year annualized trailing returns register at 4.8% and 3.6%, respectively.

Higher interest rates drove the return of the index lower. The benchmark 10-year Treasury rose from 0.92% in January to the high mark for the year of 1.74% on March 31st. It nearly reached that point again in October before rallying into year-end. It ended December at 1.51%, 59 bps higher on the year. On a positive note, credit risk was rewarded as the U.S. High Yield Index rose 5.3%. Fixed income pundits like to call high yield “junk bonds.”

Thank you for your trust in us.

MSCI EAFE Index: A free float-adjusted market capitalization index that is designed to measure the equity market performance of developed markets, excluding the U.S. and Canada.

Russell 2000 Growth: Measures the performance of those Russell 2000 companies (the 2,000 smallest of the 3,000 largest publicly traded U.S. companies, based on total market capitalization) with higher price-to-book ratios and higher forecasted growth values.

Russell 2000 Value: Measures the performance of those Russell 2000 companies (the 2,000 smallest of the 3,000 largest publicly traded U.S. companies, based on total market capitalization) with lower price-to-book ratios and lower expected growth values.

The S&P 500 is an unmanaged index of 500 widely held stocks that is generally considered representative of the U.S. stock market.

Check the background of this advisor on FINRA’s BrokerCheck.