Deciding what asset class to discuss first (stocks or bonds) was a coin flip this quarter. Interesting data exists in both. I will begin with the equity markets.

After delivering a 28 percent return last year, the market stumbled to begin this calendar year. You will recall the record year of 2021, in which the S&P 500 recorded 70 closing highs. The year started with promise as the market notched another closing high on the first trading day (January 3)—and that was the last.

For the quarter, the S&P 500 Index returned -4.60 percent. The decline was the first in eight quarters, ending the longest streak of quarterly gains since 4Q17. Historically, the market is positive in roughly 65 percent of all quarters. Statistically speaking, perhaps a decline was inevitable.

A strong return (3.71%) in March helped ease the pain investors may be feeling as the year did not get off to a good start. January was the worst monthly return (-5.17) since March 2020. 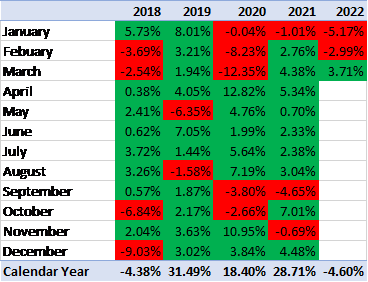 The market also registered a 10 percent decline from its peak (what pundits define as a correction)—the first since 2020. After a 13 percent decline, the market rallied hard and gained 10 percent over 10 trading days—another rare occurrence.

This type of market activity is why we preach keeping your head (while others are losing theirs). As another example, on Tuesday, March 8, the market had its worst day since October 2020. The following day, it had its best day since June 2020. Watching the daily movement of the market can make you dizzy.

A significant change in leadership occurred during the quarter. That is, value meaningfully outperformed growth. This change happened in both large and small companies. Value has teased us with outperformance before—only to succumb to the growth darlings. Could this be the time value stages a meaningful rally? 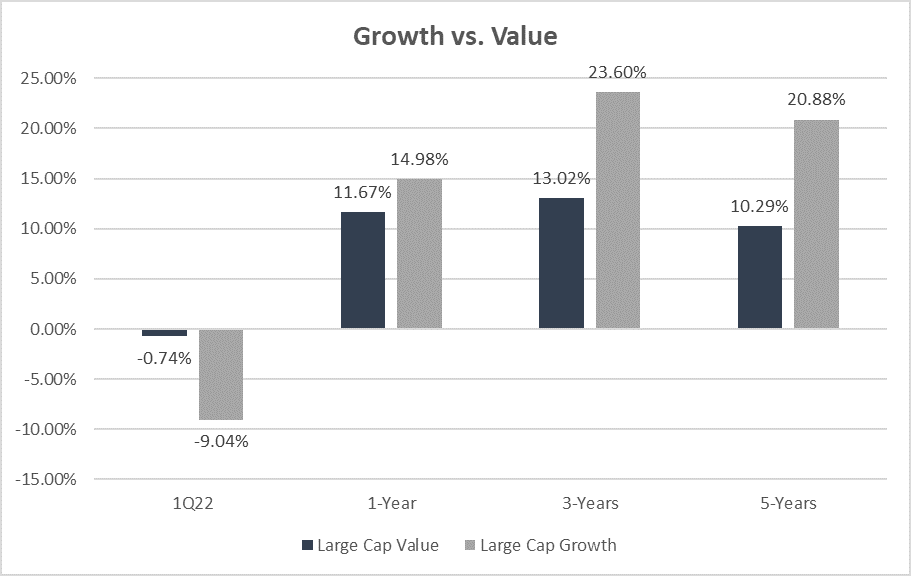 Fixed income experienced its worst quarterly return in 40 years as the Bloomberg Barclays U.S. Aggregate Bond Index returned -5.93 percent. This followed the -1.54 percent return in 2021. The index has never registered two consecutive years of negative return. The market was negative each month during the quarter. The March return for the U.S. Aggregate Index was the worst since July of 2003.

Inflation remains a focal point for the Fed and the markets. The March release of February payrolls showed 678k new jobs, well above survey estimates of 423k. Strong job creation coupled with sub-four percent unemployment has pushed year-over-year wage increases above five percent versus the roughly three percent increases generally experienced over the past decade, evident signs of a very tight labor market. The ongoing Russian invasion of Ukraine added to inflationary concerns. Oil prices, which had been on the rise for months, climbed nine percent from the time of invasion on February 24 through quarter-end. In response to ongoing inflation, the Fed raised its policy rate by 25 basis points at its March meeting, its first hike since 2018. Furthermore, they have telegraphed several more hikes this year.

Short-term interest rates increasing faster than the longer-term rate has caused the yield curve to flatten—and in early April, it became inverted. The yield curve is considered an indicator of economic conditions, given its history of inversion prior to economic contractions and bear markets. With that said, it is not a fool-proof indicator. I like to say that yield curve inversions have predicted 10 out of the last 6 recessions. From an analysis perspective, my preference is to compare the spread of the ten-year treasury versus the three-month treasury.

As investors, we should refrain from knee-jerk reactions to the recent 10yr-2yr inversion, given the long lead times that can occur before economic and market weakness. The last six 10yr-2yr inversions have preceded bull market peaks by 12 months. After inversions in these six periods, the average gain was 18 percent (source: Raymond James Portfolio & Technical Strategy). 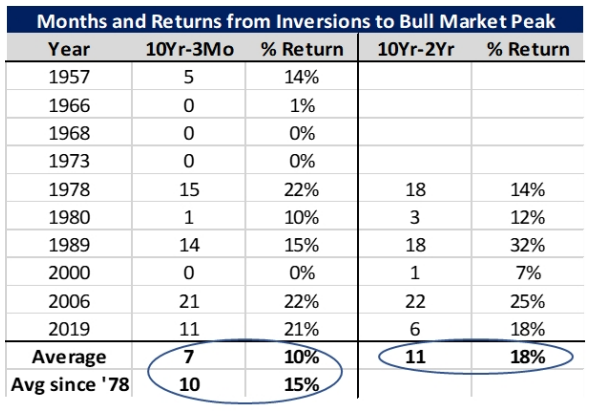 Please let us know if you have any questions. Thank you for your trust in us.

The S&P 500 is an unmanaged index of 500 widely held stocks that is generally considered representative of the U.S. stock market.

Inclusion of these indexes is for illustrative purposes only. Keep in mind that individuals cannot invest directly in any index, and index performance does not include transaction costs or other fees, which will affect actual investment performance.

The information contained in this report does not purport to be a complete description of the securities, markets, or developments referred to in this material. There is no assurance any of the trends mentioned will continue or forecasts will occur. The information has been obtained from sources considered to be reliable, but we do not guarantee that the foregoing material is accurate or complete. Any information is not a complete summary or statement of all available data necessary for making an investment decision and does not constitute a recommendation. Any opinions are those of Craig Popp, CFA and not necessarily those of RJFS or Raymond James. International investing involves special risks, including currency fluctuations, differing financial accounting standards, and possible political and economic volatility. Investing involves risk and you may incur a profit or loss regardless of strategy selected.

Check the background of this advisor on FINRA’s BrokerCheck.